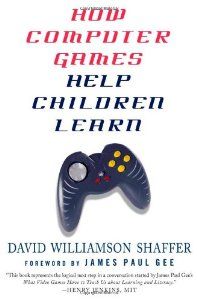 Hardcover, by David Shaffer (Professor at the University of Wisconsin-Madison in the departments of Educational Psychology and Curriculum and Instruction)

What do students really learn in schools? A lot of the time, it’s not the stuff that we really want them to learn. It’s usually things like "how to ace standardized multiple choice tests without studying", or maybe "how to stay sane while learning irrelevant and outdated facts", or perhaps "how to appear awake while sitting upright and keeping your eyes open while simultaneously being fast asleep".

Ever noticed how engaged teenagers are when they are involved in a good computer game? Contrast that with the boredom and irrelevance that many students feel about school.

Shaffer’s vision in How Computer Games Help Children Learn involves a radical re-think of schools. What we need is a system where kids learn stuff that really matters. Shaffer believes strongly that learning should develop in authentic settings, a view that is shared by Roger Schank in Designing World-Class e-Learning.

The computer games that Shaffer talks about are not the normal shoot-em-up or Tetris variety of time-consumers, but rather the kind of games that challenge students to learn valuable new things without them even realizing it. In many cases it involves the students creating things, perhaps in visual or text form.

The book describes several games where students are actually placed in a role and are required to "play for real" some activity. For example, in Journalism.net, students are given "jobs" as reporters and need to go out and write stories about the local community. In a similar vein, Science.net requires students to write on science issues in the local community.

Urban Science gives students an opportunity to learn how city planners go about maximizing land use while considering stakeholders’ interests. Shaffer contrasts this game with the famous and popular The Sims (which he calls a "God-game"). The difference is that in The Sims, you just move people and buildings around, but you do not really learn any authentic skills. There are consequences that you learn from, for sure, but there are no negotiating skills involved or deep thinking about the consequences of urban planning mistakes.

Shaffer lists the various learning outcomes as he describes each game. In many cases, it involves an increased vocabulary in the discipline of the game’s scenario and an increased ability to be able to intelligently describe or discuss the issues involved, from different points of view. And that last part is the kicker - games can allow students to painlessly look at life from different standpoints and learn how stuff works in the real world.

According to Shaffer, a game involves assigning roles to players ("white" or "black" in chess, "It" in tag) and players must follow a set of agreed rules. There is usually some imaginary behaviour and players learn from mistakes and failure. Games are usually "fun" but may involve times where you need to do mundane stuff to keep the game going. Shaffer uses the term "hard fun" to describe the situations in games where we need to learn, concentrate and be careful to achieve some outcome. The fun comes in trying and achieving.

My favorite computer game is the free flight simulator FlightGear. I have a private pilot’s license but costs are too prohibitive to fly where I live. But I can keep in practice - and learn a bunch of new skills - by piloting the flight simulator. This is very much a learning game. My role is pilot; the set of rules that I must follow involve the characteristics of the plane and the airports, proper circuit procedures, safe heights and so on. I certainly learn a lot from mistakes (not crashes, but near misses) and it is a good example of hard fun. 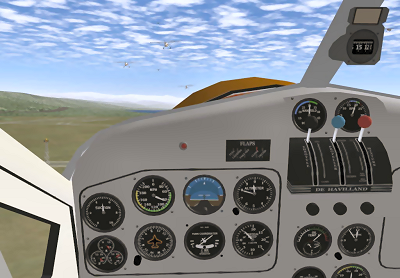 Shaffer was formerly a math teacher, so it is not surprising that he has a lot to say about the content of current math lessons (little relevance to reality) and the way they are taught (as a series of mindless exercises). He developed Escher’s World, which allows students to create Escher-like tessellations. They learned about symmetry and had a better appreciation of art as a result.

In Soda Play, you use virtual springs to create robot-like creatures that bounce around (depending on how much gravity you dial in). It is a challenge just to get your object to stand up by itself, let alone move around in a coordinated way. In Soda Play, participants have fun learning a range of physics concepts that includes center of gravity, motion in 2 dimensions and gravity.

The Pandora Project involves the ethical and medical dilemmas involved in transplanting animal organs into humans.

There is scant mention of commercial games throughout the book, since many of these have profit as a motive, not learning. However, Shaffer mentions the Atari game, Roller Coaster Tycoon, in which players have the opportunity to create their own roller coaster playground (which includes figuring out the physics of the rides, a social simulation of the patrons and they also gain experience in the business side of running such a park).

Shaffer calls such games epistemic, that is, they require you to think in a particular way about the world. Why “Epistemic”? According to Epistemicgames.org (now Games and Professional Simulations):

The word epistemology comes from the Greek root words episteme, meaning “knowledge” or “understanding,” and logos, meaning “thought” or “study.” Thus epistemology is the study of knowledge and what it means to know something.

You may be wondering - do players learn anything from massive multiplayer online games (MMOG) like World of Warcraft? Well actually, yes. They need to strategize and plan their moves; they need to take leadership roles; they need to communicate and they need to be cool under pressure. Sounds like pretty good training for most work situations to me.

Learning in a Box

One of Shaffer’s ideas that should be seriously considered by schools is to move away from a discipline approach to organizing learning. For example, math is always taught in its own "box". Most of the time, the students never leave that "box" and they never see how that math is used by real people to solve real problems. What would work much better is a multi-disciplinary approach, where students work on multiple aspects of a problem, requiring them to learn more about science, math, writing, computer tools, geography, or whatever.

How Computer Games Help Children Learn is a worthwhile read. Shaffer gives us a good overview of the games that he has worked with and describes what students have learned from those games.

I agree with him that we certainly need to change what we are doing in educational institutions, because so much time is being wasted on stuff that really doesn’t matter... And we also need to make much better use of the available technology. Telling students facts and then giving them a quiz does not cut it any more. Come to think of it, it never did.