Men are from Caves

"Men Are From Mars, Women Are From Venus" by John Gray was an amusing, if somewhat repetitive read. His take is that men by nature are solitary, problem solving creatures, while women are great communicators who would rather talk at length about problems rather than going straight for a solution. Certainly I could relate to his assertion that men retreat to their 'caves' when facing some crisis - and need space to sort things out.

It is refreshing when there is a realisation of the fact that men and women are different. After years of feminist rantings that there are no differences between the sexes (is this a fair summary...?) it is constructive that we recognise the differences and live with them. Sure it is unfair that women still have lower salaries for equal work and that they find it harder to climb the corporate ladder - this is unjust. But something became skewed in the heady bra burning days.

Reading the book reminded me of a very interesting documentary series of some years ago called "Brain Sex". It was about real-time MRI scans of males and females performing certain linguistic and mathematical problems. The differences in the way men's and women's brains work is quite dramatic. For the linguistic task, men tend to do all their cognitive processing in one region of the frontal lobe, while women's brains tend to fire all over the place. Likewise for the mathematical task - men's brains tend to solve the problem in one area of the brain while women's brains use more communication between the 2 hemispheres. The researches put this down to an enlarged corpus callosum in women - allowing and encouraging more communication between the left and right hemispheres. 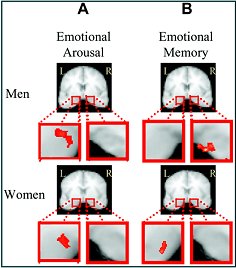 There is interesting ongoing research into this fascinating area. See "Sex Differences in the Neural Basis of Emotional Memories".

I did a lot of thinking about the implications of all this for mathematics teaching and the differences in the approaches of boys and girls to learning maths - and the struggles they had with it. Girls tend to prefer a more linguistic-based approach (more verbal descriptions on what is going on) while boys tend to prefer a symbolic and visual approach.