I recently received a review copy of The Manga Guide to Linear Algebra.

The "Manga Guides" have been very popular and currently the series includes such topics as Biochemistry, Calculus, Databases, Electricity, Electricity, Molecular Biology, Physics, Regression Analysis, Relativity, Statistics, and The Universe. The front of the book includes rave reviews for these earlier books in the series.

Earlier I reviewed the "Statistics" and "Databases" volumes. I said at the time the Manga Guides appeared to be a "winning formula", since the manga story motivated the reader to read on to the next chapter, and the books show empathy for the struggles students experience while learning such topics.

I'm not as enthusiastic about the Linear Algebra volume, since I think it missed several opportunities to help the novice learner.

Guide to Linear Algebra - the promise 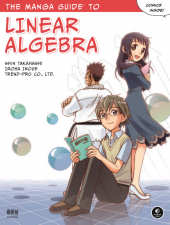 The story involves Reiji, a skinny kid and Misa, the cute sister of a karate master.

The back cover of the book promises:

"As you follow Misa through her linear algebra crash course, you'll learn about:

Reiji transforms abstract concepts into something concrete, understandable and even fun."

Many students struggle with linear algebra, so I was looking forward to diving in, especially to see the discussion on practical applications.

Let's face it. Most math books are not page-turners for most people. Anything a writer can do to maintain motivation is a good thing.

Keeping with the tradition of the others in the series, The Manga Guide to Linear Algebra has a cute story line. Nerdy Reiji takes on the job of tutoring the Hanamichi Hammer's little sister in the topic of Linear Algebra. In return, he can join the Hammer's karate club. In his first meeting with the big brother, Reiji is warned not to fraternize with Misa.

The manga story continues throughout the book between each slab of math. It works - you want to find out what happens next in the story and with math sandwiched between the manga, it's quite a good concept.

Included are a few nice explanations of Japanese culture, like "ossu" (a saying used by martial artists to increase concentration).

On the math side, Gaussian Elimination in Japanese is "Hakidashihou", or "Sweeping out". This is a good way to remember the concept (both for Japanese native speakers and those reading a translation).

I feel that a book like this provides a great opportunity to discuss the "big picture" concepts, so readers become more aware of the "why" and "how it is used" of Linear Algebra. Leave the nitty-gritty of the micro-level math to the conventional textbooks and ensure the reader has the answers to the key what, why and how questions.

Certainly the book attempts to achieve that outcome, however, I was disappointed that some of the opportunities were lost, and some of the messages promulgated by the book are unfortunate.

Early on, (p15), Misa asks some reasonable questions that most students will ask.

Misa: But I still don't understand... What is linear algebra exactly?

He goes on to explain the main idea using translations of 3-D objects to 2 dimensions (like drawing a building on a piece of paper).

However, his summary would not be understood by most newbie students, I suspect:

Say what? (If this was framed in a different way it may have been more convincing. Something like, "The fancy way of saying this is..., but that simply means ...")

Most people want to know how they will use what they are studying. Misa asks the classic question (p17):

Misa: What exactly is it good for? Outside of academic interest, of course?

Reiji: You just had to ask me the dreaded question, didn't you? While it is useful for a multitude of purposes indirectly, such as earthquake proofing architecture, fighting diseases, protecting marine wildlife, and generating computer graphics... it doesn't stand too well on its own, to be honest...

I feel the book would have been much stronger if it had been built around such practical examples, rather than concentrating on the (pure) math. Readers could still learn the theoretical concepts as a result of studying such examples. I'm not sure how many university students will be convinced by "it's just one of those things you've got to know".

What came across to me in these 2 vignettes is Reiji is uncomfortable talking about the "big picture" aspects. It would have been more satisfying if he was less apologetic about why this topic is included in many undergraduate programs.

Perhaps I'm being unfair here. Maybe my angst should be directed towards colleges who make topics such as Linear Algebra compulsory because "it's good for the students". This may be fine for math majors who have signed up because they love all sorts of math and don't mind what's offered, but for students studying other majors, they really should be given a good idea why they are doing it.

And yes, I know all students should have their thinking challenged and broadened at college level, but it needs to be done meaningfully.

Sadly, the book concentrates too much on the calculations involved. Much of this calculation can, and should be done using computers, which then frees up time for everyone to learn the key concepts and how to apply them.

In the story, Misa is not a mathematics major. She, like many real students, ends up taking abstract courses like Linear Algebra with very little idea why, or when it will be useful to her. They learn it for the exam and promptly forget it.

It's not clear why Reiji launches into an explanation of complex numbers on page 25. Misa starts to become stressed, and Reiji says:

Reiji: I think it's be better if we avoided them for now since they might make it harder to understand the really important parts.

Exactly! Why even mention complex numbers (here) if they are not going to be used throughout the rest of the book?

The cofactor method is mentioned on p88, but Reiji says:

Reiji: The calculations invovled in cofactor method can very easily become cumbersome, so ignore it as long as you're not expecting it on a test.

Sadly, the message here is "Learn for tests".

So why confuse the poor girl with much larger examples?

Why do we learn Gaussian Elimination? On page 88, we have:

Fair enough. But after doing an example which involved solving a system of equations, he says (p89):

Reiji: Gaussian Elimination is about trying to get this part here [pointing to the right hand side of the working] to approach the identity matrix, not about solving for variables.

This would leave many first-time students somewhat unsatisfied and confused. So why are we doing it again?

Pages 98 to 105 contain some really pointless - and complicated - calculation rules. Sarrus' Rule is particularly untidy. I say "pointless" because evaluating determinants is exactly the kind of thing we should let computers do. I say "untidy" because for non-mathematicians, there are hundreds of steps involved, many patterns to recognize and remember, and way too many places to make a mistake. And in this work, a mistake early on can bubble down through the whole problem. (Yes, students should learn to be accurate and to check their work. But matrix operations are universally disliked because they are tedious, prone to many mistakes and should be done using software in the first place.)

Here the message that comes across is "Math is about calculation".

Throughout the book there are interesting practical examples, but they are only briefly mentioned. I'd like to see more examples and more space devoted to examples involving:

Who is the audience?

I enjoy the Manga Guides concept, but I wonder how many math teachers would assign this as a text? (I wouldn't, since the math is too calculation-based).

How many students would buy it?

The Preface says it's for:

I put myself in the latter category. I did enjoy the story!

Let me know if you have bought books in the Manga Guides series and are in any of the above categories. What was your experience learning from the book?

I feel that the Manga Guide to Linear Algebra has missed the mark somewhat. The story line and artwork are very good, but concentrating on the calculation aspects of the math at the expense of the "big picture" aspects was a disappointment.