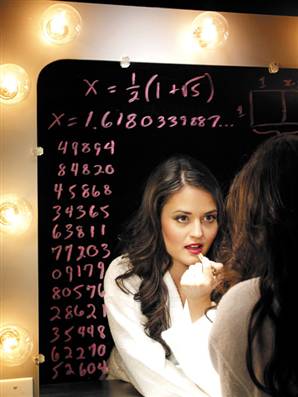 Danika McKellar has achieved recent fame for her book Math Doesn't Suck - which, according to A Math Makeover (link no longer available), is:

... aimed at helping young girls survive — "and even thrive" — in math class.

From the blurb [no longer available]:

In MATH DOESN'T SUCK, internationally known actress and bonafide math genius Danica McKellar — called a "math superstar" by The New York Times — rips the lid off the myth that math "sucks," helping to show that math can be easy, relevant, and even glamorous — while providing the tools needed to ace the next big math test!

With Danica as a personal tutor and coach, even the most frustrated student will finally "get" fractions, decimals, rates, ratios, proportions, "solving for x," and more...

Homespun advice abounds in the book, from what I can make out in this excerpt:

But math is actually a good thing.

It turns out that McKellar is a skilled mathematician:

She graduated with high honors in 1998. Around that time, she also became the only television actress in America to coauthor a groundbreaking mathematical physics theorem; it was published in the Journal of Physics and bears her name (the Chayes-McKellar-Winn theorem). [Source no longer available]

The actual paper is called Percolation and Gibbs states multiplicity for ferromagnetic Ashkin-Teller models on Z2.

It is not clear what McKellar's contribution to the paper was.

It is good to have female mathematics role models, and it is also good that the popular press has picked up on it. You never know, the book might actually inspire some girls to take further math.

Update: Here's a video of Danika talking about her acting and mathematics accomplishments.