Australia's CSIRO (Commonwealth Scientific & Industrial Research Organisation) has released a study that shows Australia's mean temperature could rise by 5°C in the next 60 years.

Australia is already the driest inhabited continent on the Earth, and the effect of such temperature change, and the reduction in rainfall that results, could be devastating. 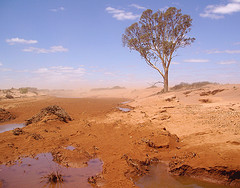 Australia is a major exporter of (clean and safe) food. But because of climate change, it may need to import basic foods - even within the next few years.

Everyone hoped that the current drought was broken when late winter rains fell in August. However, many of this year's wheat crops have already failed, since there has been hot and dry weather since.

From the report's summary findings:

You can see the full report with detailed graphs and maps here: Full Report.