Oliver Heaviside was an important pioneer in the study of electronics. 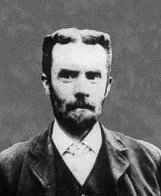 *He developed the Wheatstone bridge, used for determining an unknown resistance:

Does Laplace exist for every function? by Ankit [Solved!]