The Angles of a Square

A square is a four-sided regular polygon with each of its interior angles having a measure of 90 degrees. In a regular polygon, all the side lengths are equal, therefore, we can say that a square is a quadrilateral with all sides having an equal length. Examples of objects around us that can be in the form of a square are chessboard, stamps, paper napkins, etc. The basic figure of a square is shown below. 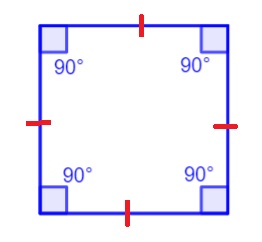 In this article, we want to learn about the properties of a square, its area, perimeter and the length of its diagonal.

A square is a quadrilateral in which:

Properties of a Square

Some of the properties of a square are given below.

Area of a Square 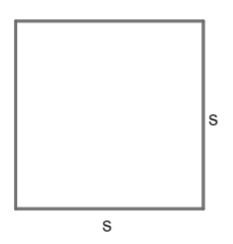 Given a square with side length, s, the area is calculated using the formula:

The unit for area is always in square units like cm², m², km², etc. The unit being squared depends on the unit of the side length.

Perimeter of a Square

The perimeter of any figure is the total length of the boundary of the figure. Consider the square below: 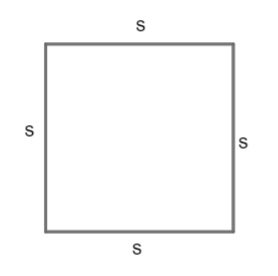 Add the length of all the sides.

Therefore, the perimeter of a square with side length s is calculated using the formula:

The perimeter is expressed in linear units like cm, m, km, and so on.

Diagonals of a Square

The diagonal of a square is a line segment that joins any two of its non-adjacent vertices. 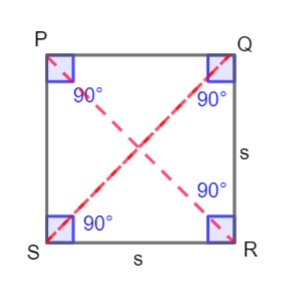 Each diagonal cuts the square into two equal right triangles where each diagonal forms the hypotenuse of the right-angled triangles formed.

Thus, for a square with side length S, we can find the length of the diagonal using the Pythagorean theorem:

Thus, the length of the diagonal of a square with side length is calculated using the formula: