Download this Basic Geometry Worksheet with 10 questions and answers as a practice test. 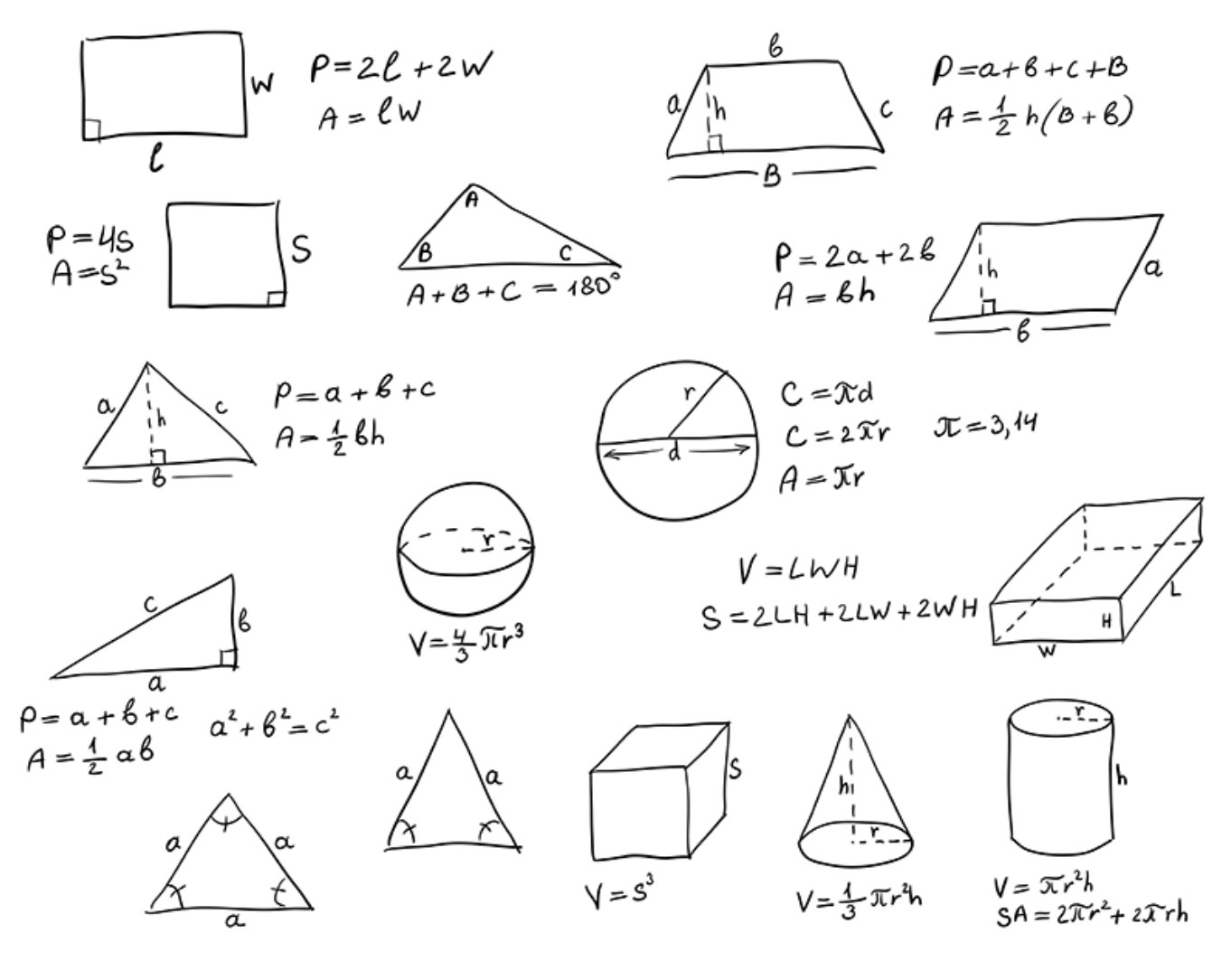 Introduction to Geometry Worksheet with Answers

Geometry has allowed humanity to greatly expand our understanding of the objects around us, and it is used on a daily basis not only in mathematics but in many branches of science. Innumerable industries rely on geometric principles, including construction, building design, product development, and city planning. Follow along as we give you an introduction to geometry, helping you see the world from a new angle.

Geometry is a field of mathematics that relates to objects, or geometric shapes as they are referred to, and their sizes, shapes, positions, or spacial properties. This subject generally covers the following areas: 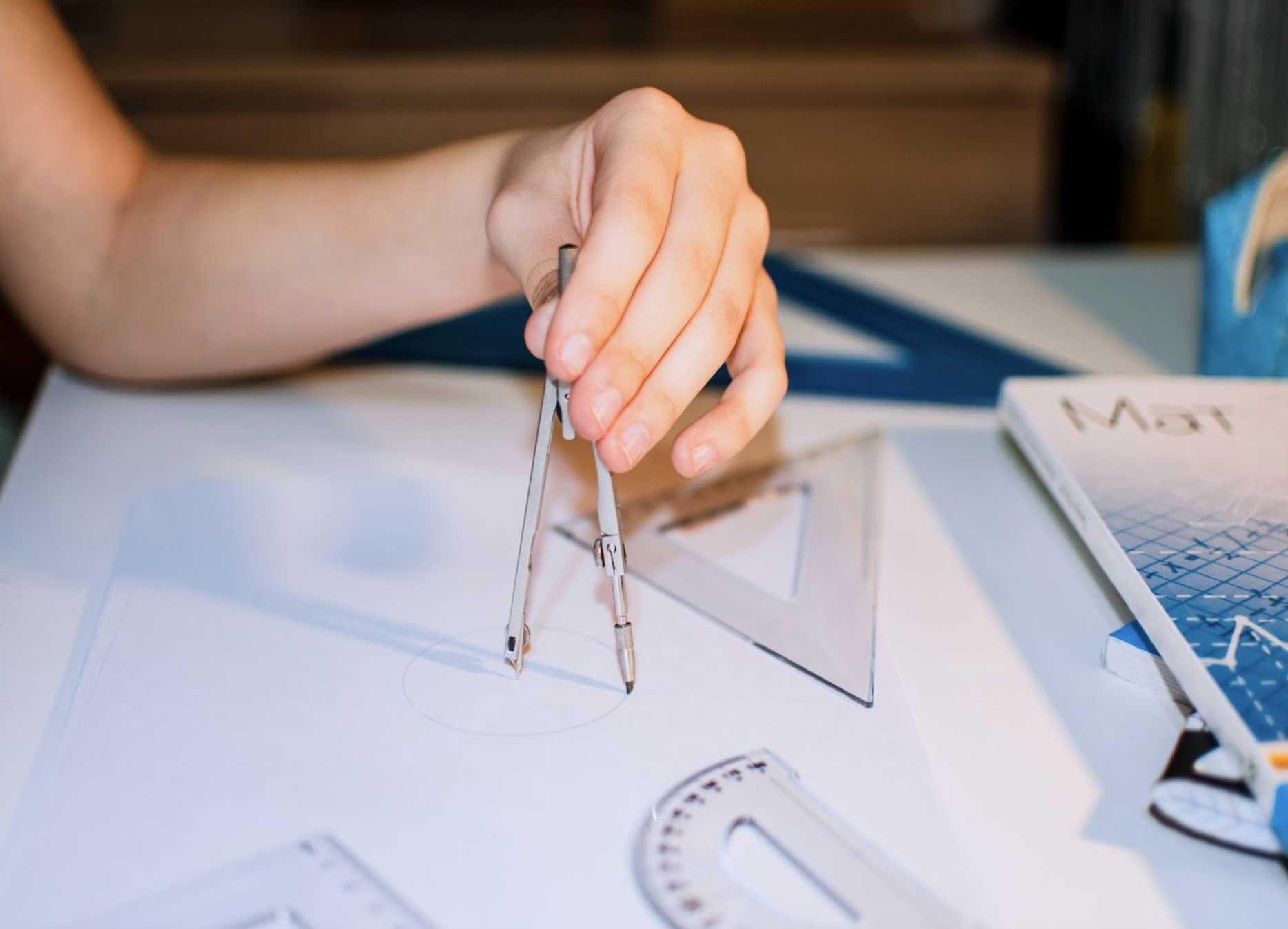 These, along with any other visually and spatially related concepts are considered to be a part of geometry. Within the vast world of geometry, there are two principal categories.

Geometry has been used since the time of the Ancient Greeks. The term "Geometry" even has Greek roots, from the Greek word “geo”, meaning earth, and “metrein” which translates to “to measure.” So it comes as no surprise that the father of Geometry is the Greek mathematician, Euclid. He even has a branch of geometry named after him—Euclidean geometry.

This is generally the first category of geometry you learn in school. That's because it explains basic geometric principles. Euclidean geometry established the foundation for much of what we understand about the field today. Academically, Euclidean geometry refers to the study of flat shapes and flat surfaces. 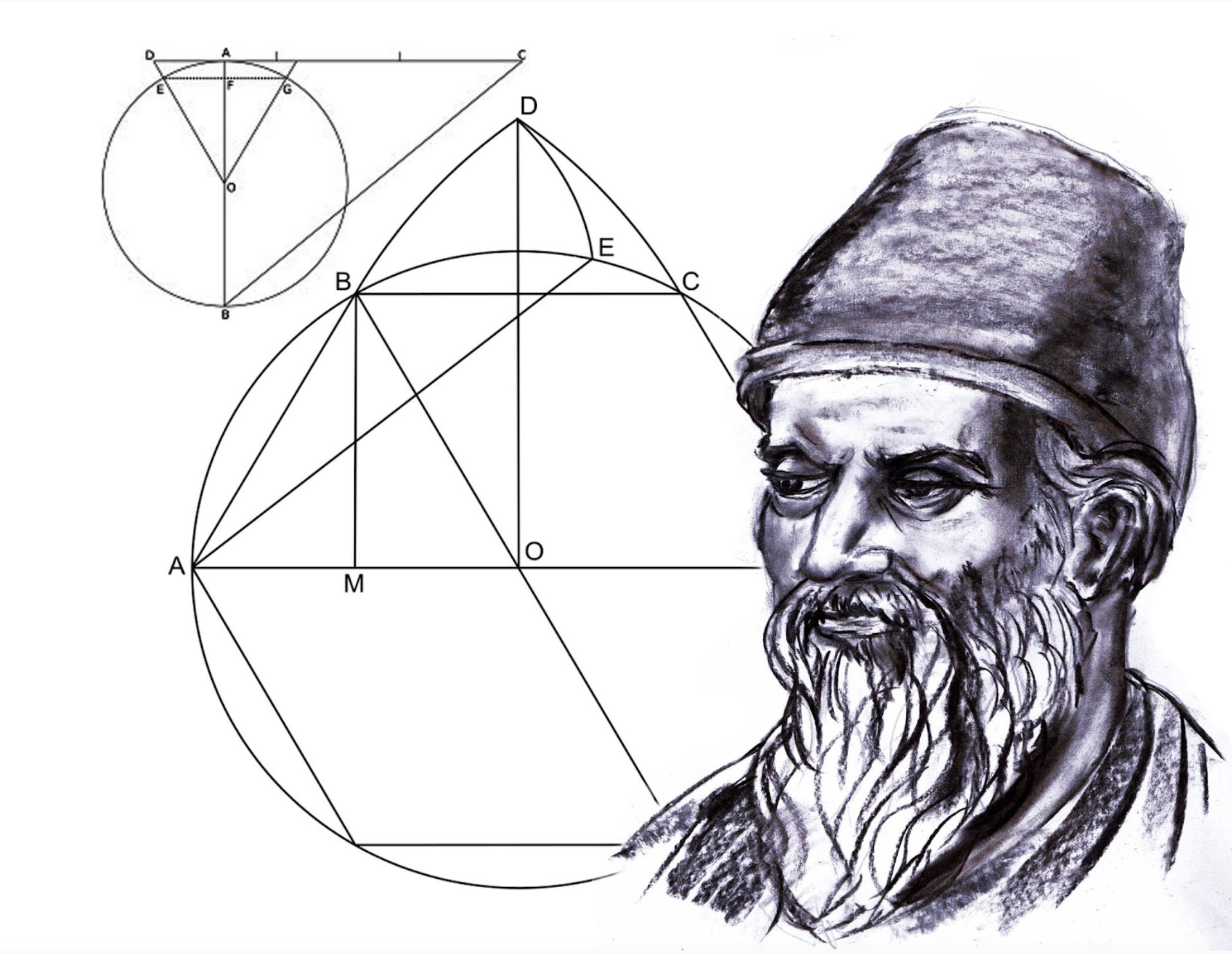 The two main kinds of non-Euclidean geometry are below.

Overall, this means Euclidean geometry will be concerned with angles, triangles, squares, lines, points, and more.

Euclidean geometry is centered around five postulates. These important building blocks are as follows:

Euclid’s axioms are still an important part of geometry today. Though they may not be mathematically proven, they're widely accepted by modern mathematicians:

For the purpose of plane geometry, consider that lines, points, and angles are all placed on a two-dimensional plane that goes on infinitely in all directions (while remaining flat). Understanding the concepts and study of plane geometry is essential in order to understand more complex forms of geometry. Some important terms to know are:

If two lines are not parallel, they will intersect at some point. When they intersect, the two lines form an angle, typically measured in degrees. There are generally considered to be four kinds of angles: 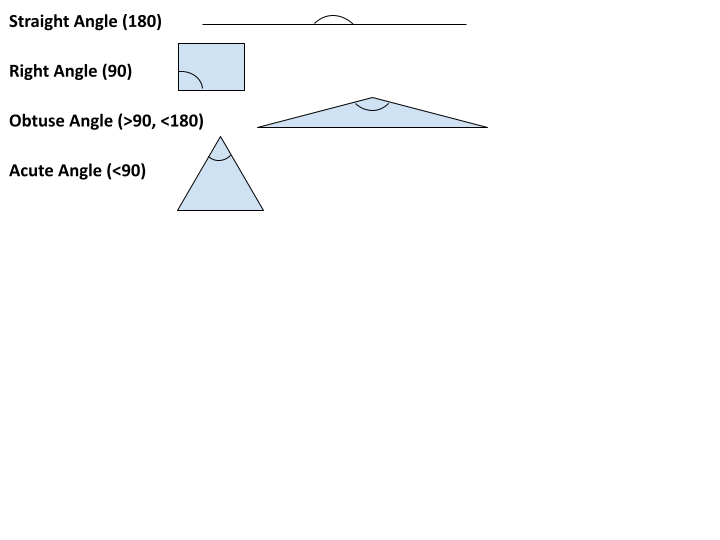 Shapes in plane geometry are classified by their properties. These are all two-dimensional shapes and can be placed on a flat plane. In order to be considered a polygon, shapes must have more than two lines and be closed. Some of the most commonly seen plane shapes include:

There are three kinds of triangles. 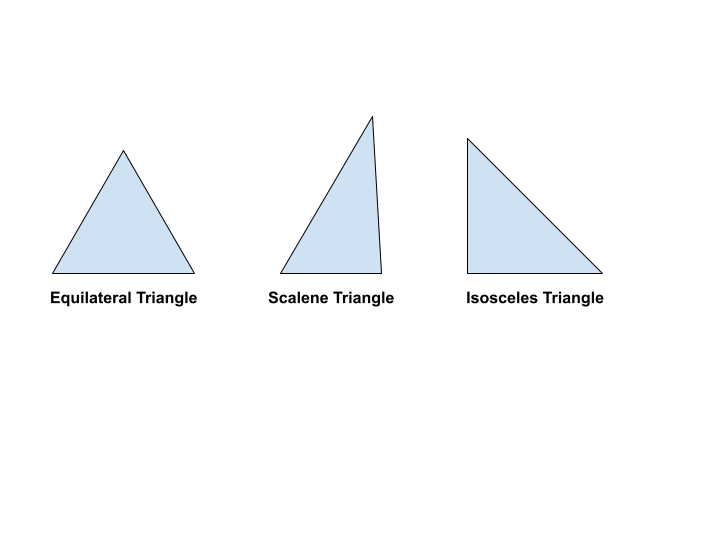 When studying triangles in particular, there are a number of theorems to help identify their properties. These include the Pythagorean Theorem, the angle sum property, the exterior angle theorem, and more. Triangles can be fully graphed with only two points and angles. For quadrilaterals, triangles, and all other polygons, it is also important to understand the concept of symmetry. Symmetry is when an object can have a line drawn through it and be exactly the same on both sides. As an example, a circle has infinite lines of symmetry.

Solid geometry is concerned with objects and solid figures that are three-dimensional. This can include the following shapes, among others: 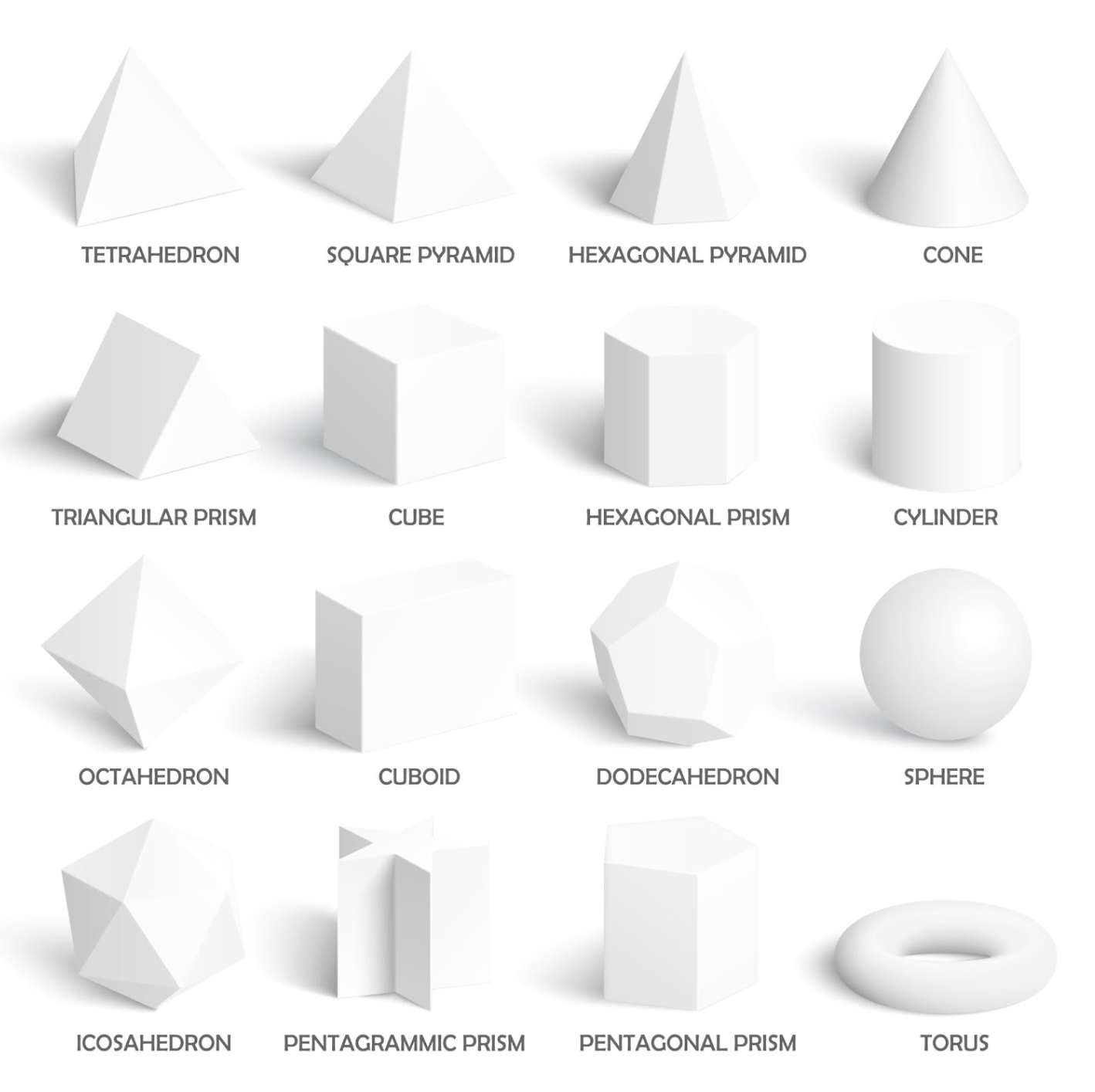 In order to be considered three-dimensional, an object needs to have length, width, and height. These three-dimensional shapes are classified by faces, edges, and vertices. Vertices are the corners of the shapes, faces are the sides, and edges are the lines. For example, a cube has a total of 8 vertices, while a cone only has one single vertex.

When measuring objects in geometry, there are many things to consider. Every geometric shape can be measured in perimeter, area, surface area, and volume.

These measurements can be calculated in different ways, using specific formulas dependent on the nature of the shape. 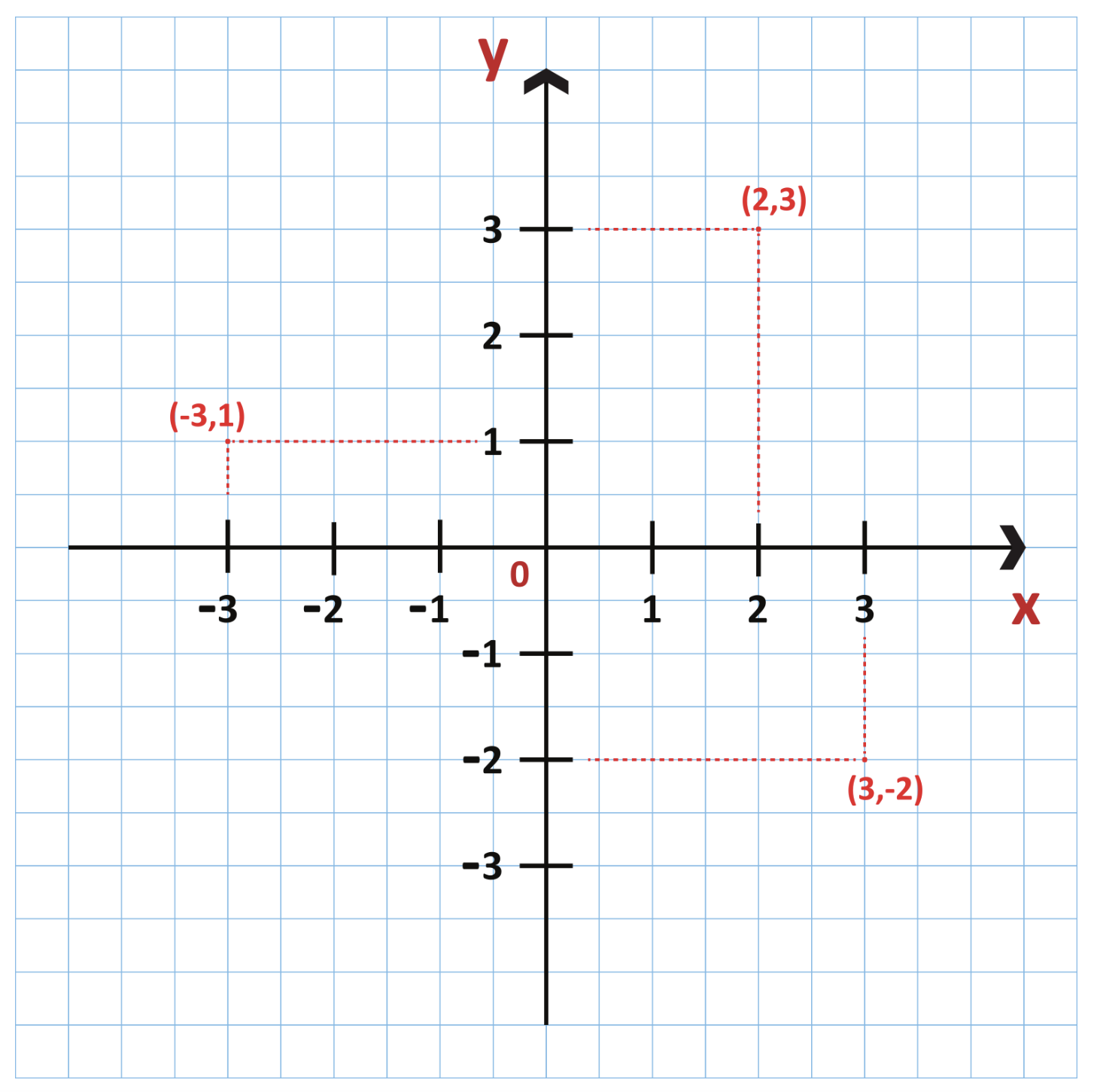 Coordinate geometry can show properties of geometric figures, such as lines, curves, ellipses, hyperbolas, circles, and more. Curves are represented with an algebraic equation. With the use of many different formulas, including the distance formulas, the section formula, the midpoint formula, and more, these shapes can be completely graphed and identified. In other words, an algebraic equation can indicate a specific curve.

The three-dimensional Cartesian coordinate system instead has three axes. The X, Y, and Z-axis are all perpendicular to one another. Since there are three axes instead of two, that means that instead of quadrants, these graphs are divided into a total of eight sections (sometimes called octants). The coordinates are called:

Perhaps the easiest way to think about this is to imagine a screw. A screw has a solid shaft in the middle surrounded by the helical thread. The thread allows the screw to pull itself into another material. Because the thread is not on a singular plane, you can’t get an accurate measurement for the radius without understanding how the curvature of curves and surfaces work.

Understanding these allows for the shortest path between two points on a surface to be measured.

The distance formula helps find the shortest distance between two points. It is calculated by using the following formula. The distance equals the square root of (x1- x2) squared + (y2-y1) squared +(z1-z1) squared). This formula can help you ascertain any missing coordinates.

Section formula can help you find the coordinates of a point that divides the line segment. The point which divides the given two points is on the line adjoining the two points. It is available either between the two points or on the line beyond the points indicated. The formula is used widely in Physics as well as Mathematics. In Physics, it is used to find the center of mass and points of equilibrium.

Some of the key vocabulary words that are important for a geometry student to know and understand are below:

1. What is the volume of a pyramid whose base is a regular pentagon with an area of 60 m2 and whose height is 10 m?

Volume of a Pyramid = ⅓ x [Base Area] x Height

2. What is the value of F + V - E for a prism whose cross-section is a heptagon?

Draw a heptagon prism. The prism has 9 Faces, 14 Vertices and 21 Edges.

4. AB is an arc of length 14 in. on the circumference of a circle with center C. The size of angle ACB is 3.5 radians. Find the radius of the circle.

5. BC is an arc with a length of 72 feet on the circumference of a circle with the center D and a diameter of 24 feet. What is the size of the angle BDC in radians?

7. The following isosceles triangle has two equal sides, each with a length of 10.3. Angle A is a right angle. What is the size of the missing angle "B"? 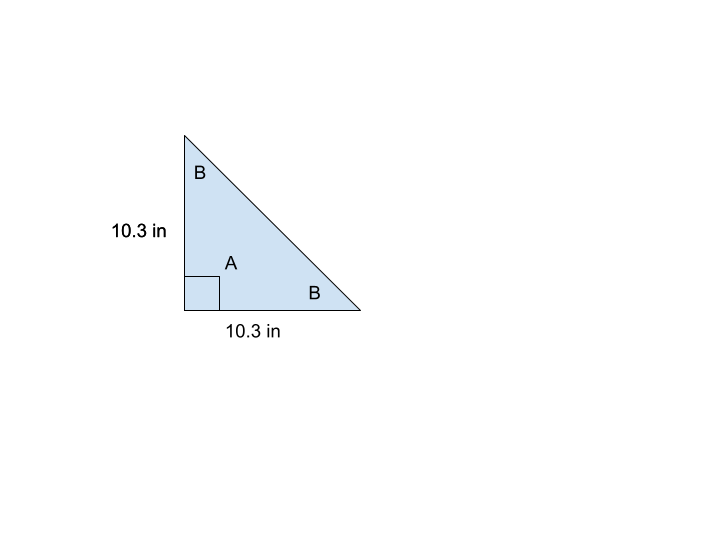 9. In the following diagram, what is the size of angle BAC? 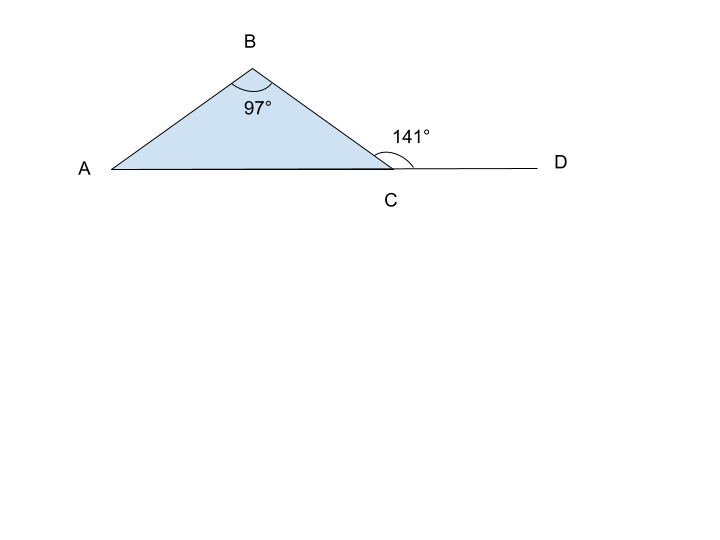 10. What is the surface area for a regular tetrahedron when the total length of the edges is 48 mm? Round to the nearest 1/100th