A good way of presenting a function is by graphical representation.

Graphs give us a visual picture of the function.

The most common way to graph a function is to use the rectangular co-ordinate system. This consists of:

Where did all this come from? 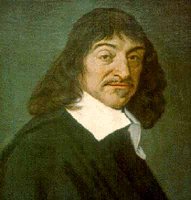 The x-y coordinate system is also called the Cartesian Coordinate system, after its developer, Rene Descartes (1596 - 1650). This graphing system was incredibly important for the advancement of science and engineering.

The x-value, called the abscissa, is the perpendicular distance of P from the y-axis.

The y-value, called the ordinate, is the perpendicular distance of P from the x-axis.

The values of x and y together, written as (x, y) are called the co-ordinates of the point P.

It's called the "rectangular" coordinate system because the scale used along the x-axis is evenly spaced, as is the scale along the y-axis. Other systems exist where the scale is not even (see Log-log and semi-log graphs) and some are even circular (see Polar Coordinates)

To answer this properly, we need to do the following:

Here is our result.

Where is the fourth vertex `D`?

Since the opposite sides of a rectangle are equal and parallel, we can see that:

So the only region where both co-ordinates for all points are negative is the "third quadrant (III)".

The shaded area represents the region in question.

The negative `x`- and negative `y`-axes are dashed to indicate they are not included in the region.

Q1 Where are all the points whose abscissas equal their ordinates?

So the question means "where on the rectangular system do we have x = y for all points (x, y)?"

They are on the negative part of the y-axis, indicated by the magenta line.

2. Functions from Verbal Statements
4. The Graph of a Function

Microphones are one of the many real-life applications of graphs in polar coordinates. Read more »

How to reflect a graph through the x-axis, y-axis or Origin?

Coordinates of intersection of a tangent from a given point to the circle by Yousuf [Solved!]

Not getting how to calculate function equation from graph by HarshalDalal [Solved!]

Domain and range by shaikshavali [Solved!]

What is the function for the number 8? by Sherry [Solved!]

Easy to understand math lessons on DVD. See samples before you commit.