Here is a chart of the Australian dollar's value against the US dollar for a period of several hours: 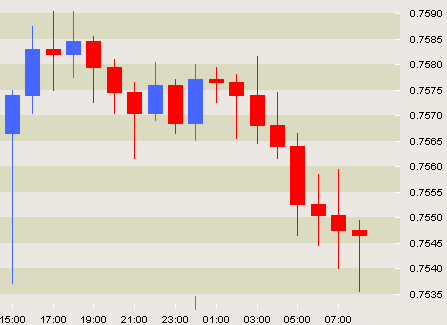 What is going on in this chart?

Each vertical bar represents one hour of trading. We can see the start price and finish price for each hour, as well as the maximum and minimum prices reached during the hour.

The blue candlestick means the price has gone up during the hour.

The red candlestick indicates the price has dropped:

Traders of shares and currencies (and many other things like commodities, precious metals, etc) sit glued to their computer screens watching these patterns. As the pattern changes (like in the middle of our chart above), they make buy and sell decisions, hoping to make lots of money.

Candlestick charting began in Japan in the 17th century as traders were trying to predict what the price of rice would do next. They saw price analysis in terms of a struggle between buyers and sellers, and who was in control.

These are the prices (in US cents per pound) for Brazilian Natural Arabicas coffee in 2005:

A chart of this data shows some volatility (moving up and down a lot).

Using Excel, we can easily add a moving average trendline. I have chosen 3 intervals for this plot:

We can see that the moving average smooths out some of the volatility in the curve.

What is Excel doing for us?

The average of the first three prices (Jan, Feb, Mar) is

The average of the 3 prices starting from February is

Can you see how the average has "moved"? That is, we are always taking an average of 3 prices, but each time the first price moves one along in the sequence of numbers.

The next average would be for Mar, Apr, May:

This table shows all the values that are represented in our moving average chart above.

If we take more terms each time, the moving average becomes more and more smooth. 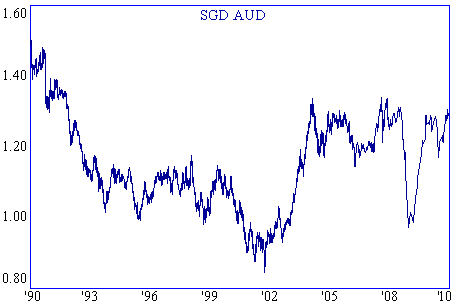 There has been a rapid rise in the value of the AUD since late 2001, mostly because of rising commodities prices and all the stuff Australia sells to China.

What can moving averages tell us about the future movement of the Australian dollar?

Here is a chart showing the 52-week moving average (red). Notice how it has smoothed out the volatility. 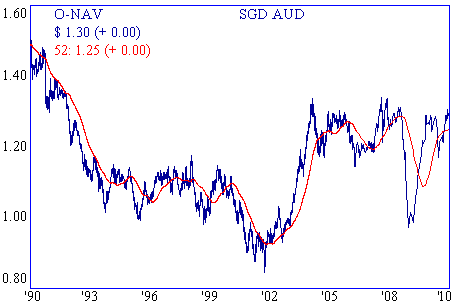 How far will it go? No-one knows for sure, but it is interesting how often the Fibonacci ratios are valid, and how they can be used to predict future prices.

We have seen the Fibonacci sequence before in Math Behind the Beauty. The sequence starts with 1 and each of the following numbers in the sequence is the sum of the previous 2 numbers. So we have:

This pattern occurs often in nature - and can be recognised in the financial markets as well.

A few important ratios arise from the Fibonacci sequence. If we take the ratio of a pair of large Fibonacci numbers (like 13/8 or 21/13 and keep going for large values in the sequence), we get the value:

Other important ratios arising from Φ are:

Why are they important? Because many analysts believe that the financial markets move up and down by multiples of these ratios and so they help in predicting the market.

I'm not totally convinced about using Fibonacci for prediction, but it is an interesting issue to consider.