Series and the Binomial Theorem 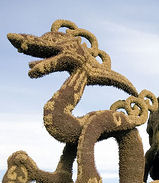 Once upon a time a brave Prince slayed a dragon and saved a beautiful young woman from certain death.

It turned out that the woman was a Princess.

The Princess's father was the King of all the land, and he was very rich. When the King found out what happened, he offered the Prince anything in his kingdom.

The Prince, having studied his mathematics when he was a boy, said "What I ask is very small. I desire to have one grain of rice on the first square of this chess board, 2 on the next, 4 on the next, 8 on the next, and so on until the 64th square."

The King, who was a rather silly man (he didn't study very hard when he was young), agreed immediately.

How much rice did the Prince get?

Find the answer at Geometric Progressions.

We begin the chapter by learning about arithmetic progressions »