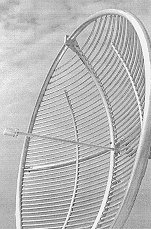 Parabolic antennas are another application.

Real mathematics is about modelling situations that occur naturally, and using the model to understand what is happening, or maybe to predict what will happen in future.

The quadratic equation is often used in modelling because it is a beautifully simple curve.

The parabola is closely related to the quadratic equation

Complex Numbers arise out of the problem where we cannot find the square root of a negative number.

We can see quadratic equations used in integration by partial fractions

Curve sketching (an application of differentiation)

Areas under parabolic curves and Simpson's Rule (applications of integration)

What's in this Chapter?

1. Solving Quadratic Equations by Factoring, where we learn how to use factorising to find the value of x in problems like: `x^2− 7x + 10 = 0`

2. Completing the Square, which introduces the concept behind the quadratic formula.

3. The Quadratic Formula, the well-known formula for solving quadratics.

4. The Graph of the Quadratic Function is a parabola, and this helps us to visualize the solution for a quadratic.

5. Equations in Quadratic Form shows how some complicated equations can be reduced to a quadratic formula and then easily solved.