Draw the v-t graph and find the total distance travelled. 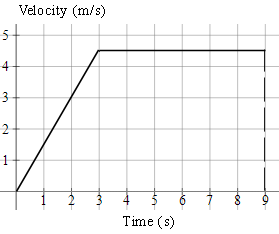 Total distance travelled is the area under the graph (in this case we need to find the area of a trapezium).

(c) the time taken to cover half the distance. 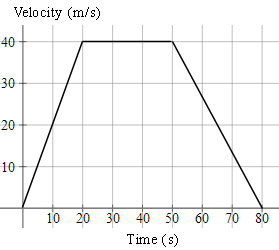 a) `text(distance)= "area of trapezium"`

The base of this unknown trapezium has length `t`, and the top of the trapezium will have length `t-20`. So we have:

3. A car is travelling at a constant speed of `72\ "km/h"` and passes a stationary police car. The police car immediately gives chase, accelerating uniformly to reach a speed of `90\ "km/h"` in `10\ "s"` and continues at this speed until he overtakes the other car. Find:

(a) the time taken by the police to catch up with the car,

(b) the distance travelled by the police car when this happens.

Draw both journeys on the same velocity-time graph and determine the time and distance that the second car overtakes the first car. 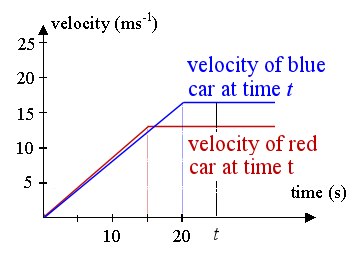 Similar to the problem above, we have:

First car's (red) distance at time t is found by finding the area of the trapezoid whose boundary is the t-axis, the red lines and the vertical line representing time at t seconds. This of course assumes `t > 15` (otherwise, we have negative distances, and the trapezoid only starts at `t = 15`.)

The distance of the second car (blue) is found by finding the area of the blue trapezoid, bounded by the blue lines, the t-axis and the vertical line. (And this one assumes `t > 20`, for the same reasons as above.)

The distance when they meet is the same, so:

However, this solution gives us a dilemma. As mentioned above, the expressions we found for the area of the trapezoids required t to be more than 15 s and 20 s, respectively.

We can confirm the blue car overtakes the red car before `20` seconds, by calculating the distances travelled at that time.

The blue car has travelled further than the red car, so it means it has already overtaken the red car.

Back to the drawing board

So, in fact, for this question we need to consider the area of the blue triangle, not the blue trapezoid.

This is the correct diagram for finding t: 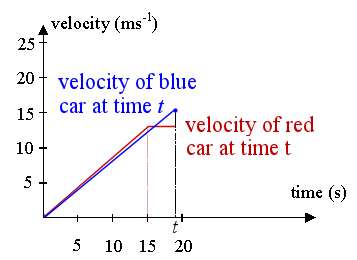 The red car's distance is fine from before (it's a trapezoid):

But the blue car's distance at t is the area of the triangle (not trapezoid) bounded by the blue line and the vertical line at t (we are taking `1/2` base times height):

The first solution has no practical meaning, since `t > 15` for the expression to work.

To illustrate we have found the correct answer, below is the graph of distance against time. Labelling of axes is very important in this work!

The red curve corresponds to the acceleration portion of the first race car. At `t = 15`, or point C `(15, 101.25)`, the red car stops accelerating and continues at a constant speed (CA is no longer a curve, but a straight line).

The blue curve corresponds to the second (blue) car. It doesn't accelerate as hard (its curve is below the red curve, indicating it covers less distance in the same time), but it accelerates for longer. At `t = 20`, or point D `(20, 170)`, it stops accelerating and its graph is now a straight line. 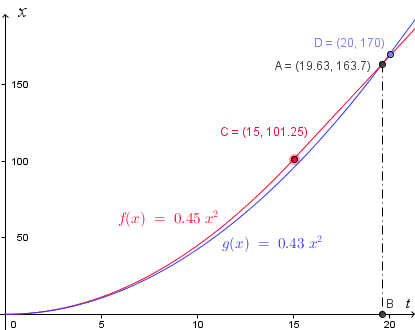 Where did the curves come from?

We learn later in the calculus section (Applications of the Definite Integral), how to find the distance function from a given velocity function using integration.

[Hat tip to reader Christopher who pointed out the "dilemma" in this problem. The earlier answer was reasonable, but not correct!]