Acceleration is the change in velocity per time.

We can find the acceleration by using the expression:

We can write the above using the equivalent

where the Greek letter `Δ` (Delta) means "change in".

In other words, the slope of the velocity graph tells us the acceleration.

A very useful aspect of these graphs is that the area under the v-t graph tells us the distance travelled during the motion.

This concept is important when we find areas under curves later in the integration chapter.

c. What is the distance travelled in `3` seconds?

d. Note in the graph that we have velocity on the vertical axis, and the units are m/s.

Recall: Area of a trapezoid

NOTE: A trapezoid has one pair of parallel sides. (It's called a "trapezium" in British English.)

We find the area of a trapezoid by simply finding the average of the two parallel sides, and multiplying by the distance between them (usually called the "height"):

We'll make use of this result in the next question.

A body moves as described by the following v-t graph. 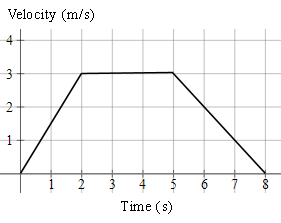 a) Describe the motion.

b) What is the distance travelled during the motion?

c) What is the average speed for the motion?

The body was neither speeding up nor slowing down.

The body was slowing down, so the acceleration was negative.


b) The distance travelled is the area of the trapezoid (trapezium).